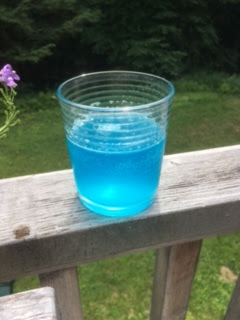 In the Star Trek original series episode "The Enterprise Incident," Spock and the Romulan Commander drink an unidentified blue beverage.  Romulan drinks have been blue ever since.  Romulan ale was first identified as such in Star Trek II: The Wrath of Khan in this scene.  Every franchise appearance of the stuff implies it is strong in flavor and high in alcohol.  Beyond that, no specifics are offered.
But no doubt, it's definitely blue.
I got my recipe from The Geeky Chef Drinks by Cassandra Reeder.  She suggests a combination of overproof white rum, blue curaçao, lemon juice and ginger beer.  "Overproof" definitely exceeds our needs so I went with standard Bacardi.  For ginger beer, I used Fever-Tree, definitely a spicier option.
The result is quite nice, though it didn't pack the punch I might have wished.  Obviously, a stronger rum would make a difference but I would prefer to intensify the ginger.  Perhaps one could cut out the lemon juice in favor of more ginger beer.  Or maybe seeking out stronger ginger beers or other gingery ingredients would be good.
I'm definitely pleased with the blue.  My wife has been quite resistant to the idea of blue drinks but I convinced her to try this one.  In general, I am trying to expand the color palette of my liquor cabinet.  I have a sentimental affection for blue drinks anyway.  I had a friend in college who was partial to them.
Posted by The Armchair Squid at 1:00 AM