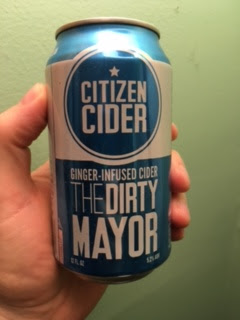 Citizen Cider is based in Burlington, Vermont and has established itself as the hip, accessible local brand. The Dirty Mayor is named for Ric Cengeri, a longtime radio personality in our area, nicknamed "The Mayor."  Its driving flavor ingredient is ginger, always a winner with my wife.  It's an intimidating challenger for our current sipping champion.
Citizen Cider The Dirty Mayor vs. Woodchuck Cider Pearsecco
Given the ginger factor, the Mayor was always going to be the winner for my wife.  I have to give it the edge, too.  The ginger gives the Mayor more body than the Pearsecco.  I like the fact that it's less sweet, too.  I also sensed a funky aftertaste with the Pearsecco this time that I had missed before.  Maybe the ginger in The Dirty Mayor brought it out?
It's a close call, though.  The defending champ is still plenty good.  In this tasting, I was particularly appreciative of the fact the Pearsecco truly does taste like pears - the fruitiness doesn't always come out so reliably in a cider, the sugar or acidity often more prevalent.  We both feel the Pearsecco is probably a better candidate for mixing.  The ginger might not play so nicely with the other ingredients in a D-Day Swizzle.
Winner and New Champion, Sipping Cider Category: Citizen Cider The Dirty Mayor
Posted by The Armchair Squid at 1:00 AM