For me, the '80s were the heart of adolescence. Crushes were like pimples, popping up all over the place. For the Tumble 4 Ya Blogfest, the hard part was coming up with just one. Leslie Hunter, Ally Sheedy's character in St. Elmo's Fire, came to mind first so she wins top billing.

My choice of the character rather than the actress is deliberate. At the time, I would have said that my crush was on Sheedy but thinking back now, she never did much for me in her other films. I tried. The Breakfast Club is outstanding, of course, and she deserves a lot of credit for creating a believable character. I knew girls like that in high school, the ones who worked a little too hard at being invisible. But Allison Reynolds wasn't exactly crush-worthy. Stephanie Speck in Short Circuit? The whole film was a bit too precious and Sheedy's character especially.

So, why Leslie Hunter? Well, she was darn cute for starters. The eyes, the hair and the impish smile just made you want to gather her up in a blanket for the evening. I suppose, too, the protector within me wanted to save her from her womanizing boyfriend, Alec (Judd Nelson). In fact, I suspect that my crush on Leslie may have had its roots in my sympathy for Kevin, Andrew McCarthy's character. He was her trusted confidant, secretly in love with her. That's a role I knew well at that age.

There are many others worthy of honorable mention. Watts, Mary Stuart Masterson's character in Some Kind of Wonderful, was a big one.

Masterson was also great in Heaven Help Us, another Andrew McCarthy picture and an under-appreciated film if you've never seen it.

Among athletes, East German figure skater Katarnia Witt was without equal, on the ice or in my heart. 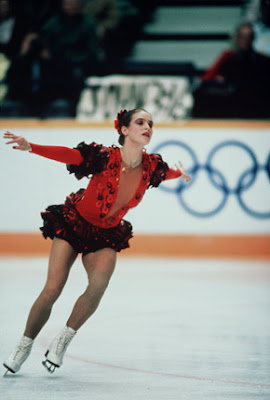 I had a Sports Illustrated subscription for most of that decade and the arrival of the swimsuit issue was a deeply spiritual annual event. Now, I recognize that the issue is completely gratuitous, though far from the most objectifying rag on the newsstand. But at the time, pictures of scantily-clad supermodels delivered to my mailbox were like manna from heaven. I believe Ric Ocasek when he says he's the luckiest man alive for being married to Paulina Porizkova (cover model in '84 and '85). My favorite SI model, though, was Kathy Ireland ('89, '92 and '94).

Photo via My Fashion


Curious about other '80s crushes? Take a stroll through the participating blogs listed below.

Posted by The Armchair Squid at 5:27 AM