On the Coffee Table: Zander Cannon

I went to a small liberal arts college in Iowa, the sort of place where everyone dreams of being published one day. As such, my classmate Zander Cannon was the subject of great envy and admiration when we all found out he'd gotten a comic book published - in our junior year, even! Zander was both writer and artist for the first issue of Chainsaw Vigilante, a Tick spin-off, in 1993. It was just the beginning of an impressive career. In the years since graduation, he's worked with some big names in the industry, including Alan Moore (V for Vendetta) and Bill Willingham (Fables). He and another fellow alum have their own publishing company: Big Time Attic.

I haven't seen Zander in many years but having recently entered the comics hobby myself, I've kept an eye out for his work. I figure as long as I'm spending money on this stuff, some of it should be going to the one person I actually know in the business. I recently picked up two collections of his older projects: The Replacement God, for which he was again both writer and artist, and Top 10 Book 1, for which he served as layout artist. Obviously, I was predisposed to have a positive opinion. That said, in total objective honesty, I was extremely impressed by both...

The Replacement God was Zander's first publication after Chainsaw Vigilante. This was a black-and-white series distributed by Amaze Ink. To me, what is most impressive about Zander's career is his success as both artist and writer. Even the biggest stars in the comics biz have generally stuck to one or the other. The Replacement God is a delightfully irreverent take on fantasy narrative, the classic tale of a reluctant hero. The artwork is stunning. I'm particularly fond of several panels in which the speech bubbles are obscured by the same heavy rain as the surrounding image - very clever, sir!

I have gathered from his Facebook postings that Zander is trying to relaunch this title and I hope he does. All of the characters are engaging and the end of the first series left plenty of openings for further adventures. 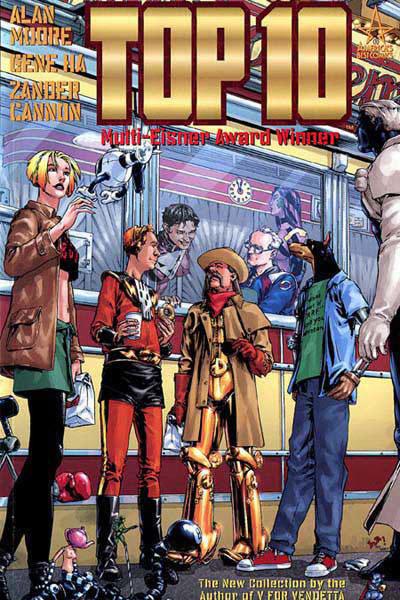 Image via the Negative Zone

While Zander has continued to get writing work - in recent years, he was the writer for both Star Trek TNG: Ghosts and Transformers: Bumblebee - most of his higher-profile efforts have been as an artist. I was first introduced to the work of Alan Moore with the film V for Vendetta which was based on his graphic novel of the same title. I liked the movie a lot more than I expected and was very impressed when I learned that Zander had worked with the story's creator.

Whatever it all means, Top 10 is top-notch, the most enjoyable non-Japanese title I've yet encountered in comics. Moore is a master storyteller and the artwork is beautiful, greatly enhancing the narrative and the reader's investment in the characters. Not only am I inspired to follow more of this story (there's a Book 2 and spin-offs as well), but also to seek out Alan Moore's other work and other Eisner Award winners, too, as those folks clearly know a good thing when they see it.

Most of Big Time Attic's work these days is in graphic non-fiction but Zander still has his hand in the comics game. Most recently, he was a contributing artist for Fables #113. I've yet to pick up a copy but I certainly will. One of the most gratifying aspects of the comics hobby for me has been exploring Zander's work and I intend to continue. I hope some of you will, too!

Posted by The Armchair Squid at 10:55 PM