Family Adventures: The Cost of an Early Spring

After a glorious week of sunny days and temperatures in the 70s, we got back to more typical early spring weather this weekend: rainy and chilly. Due to our mild winter in Vermont, there are already buds on the trees - about a month earlier than usual. It will be nice to see green soon but, as we will address shortly, the early spring has come at a cost. On to the highlights of a busy weekend...

Early spring, a.k.a. Mud Season, is arguably the most miserable time of year in Vermont. As the snow melts, all of our charmingly rustic dirt roads turn to goop. Winter's beautiful white is gone and the glorious green of seasons to come has not yet taken hold. Instead, there's wet, brown muck.

The annual payoff for this gloomy time of year is an awfully good one: maple syrup, a substance for which Vermont is justifiably well-known and very proud. This weekend was the official open house weekend for the sugar shacks statewide. Unfortunately, everything I wrote last week about this being a good year for maple sugaring was completely wrong. Once the trees bud, the sap stops running. It's all over. Last year, they were able to tap the trees until mid-April - brutal.

Undeterred, we dutifully visited our closest sugaring house, owned and operated by the family of one of Our Girl's good friends. They didn't have any grade B, our favorite, and are unlikely to given the weak harvest. We got some grade A medium amber and also some maple sugar for toast and such - a perfectly respectable haul but one hopes for better next year for their sake more than ours.

Lost again, 1-0. It's a distressing pattern. I do feel like we get better each week and I think we can be particularly proud of how we played in the first period as most of the action was in our opponents' end of the ice. I'm working on being a better passer and that was going well - for a while.

What's killing us is a lack of subs. There were only six of us on Saturday night, just enough to field a team. For next season, we need to find people who will show up. Those of us who've been playing regularly have improved and others would, too. Playing thirty minutes with barely a chance to catch your breath between periods is just too much. It was my own errant pass that started the other team on their breakaway for their only goal. I take full responsibility. But, if I hadn't been exhausted, it might not have happened.

Focus on Film is currently in the midst of the 15th Annual Green Mountain Film Festival. Most of the festival takes place in Montpelier but there will also be screenings in St. Johnsbury next weekend. We went to see A Cat in Paris this morning. The film was shown at the City Hall Arts Center, a fairly large space that I was sure couldn't be filled on a Sunday morning. Boy, was I wrong! This was the festival's big kid-friendly feature but there were plenty of all age groups in attendance. Everyone applauded at the end, too. I love it when people clap at the end of a movie. 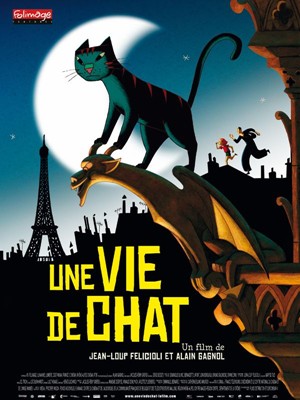 The film is very charming, well-deserving of its Oscar nomination for Best Animated Feature. The story is pretty straight-forward: a mute girl living with a single mom and a cat who goes on nightly adventures. There's more, of course, but I won't spoil the fun for anyone interested in seeing it. The animation was very nice, mostly cell-animation, I think. The plot is simple, easy to follow and moves along at a fair clip. My Wife didn't like the Olive Oilish chests on the women and I didn't care for the lines on the faces - looked like whiskers on the men and freckles on the women but they just made everyone look untidy. But overall, all three of us enjoyed the film very much. Four out of five stars from me.

Editorial Note: Suze's comment below made me think that perhaps one might get the wrong idea from my previous paragraph. There's not a thing wrong with freckles on women or whiskers on men. But they were drawn similarly so it looked like the women had whiskers high on their cheekbones. It just didn't look right.

My Wife commented that perhaps next year, we'll see nominated movies before the Oscars. I think she may have been a little embarrassed at the Oscar party that we hadn't seen more of the films. Seeing as Our Girl has come to terms with the fear of the dark element, our cinema attendance has increased dramatically over the past several months. I think we'll be in respectable shape in time for next year's party.

“I went into a restaurant. The menu said, ‘Breakfast anytime.’ So I ordered French toast during the Renaissance.” - Steven Wright

In my opinion, the three most beautiful words in the English language are "Breakfast Served Anytime." Such is the promise at Coffee Corner, just down the street from City Hall. Our wait for a table was a bit long and I was more than a little grumpy by the time we were seated but all turned out fine in the end. I had a half-stack with a side of corned-beef hash. I initially ordered the full stack but our waitress advised against. "Most people don't finish the full stack," she said, "I don't want you to waste your money." So, I ordered the half and she promised to bring me more if I was still hungry. Fair enough.

The half stack was plenty - and glorious. I love a good pancake - a spongy one that melts in your mouth. In truth, I probably could have had more but it seemed silly to do so just to prove a point. I was happy with my meal.

Our final stop on the way home was our local independent book store, Phoenix Books in Essex. Business must be going well as they're opening a second location in Burlington. The reason for our visit today, however, was an art display by Our Girl's after-school art program. We got to see animal paintings by Our Girl and her friends - impressive work by all, especially considering the age. She loves art and I'm very pleased that we've found such a meaningful outlet.

Posted by The Armchair Squid at 4:52 PM