Title: Lupin the Third: The Castle of Cagliostro
Director: Hayao Miyazaki
Original Release: 1971
Choice: Our Girl's
My Overall Rating: 4 stars out of 5 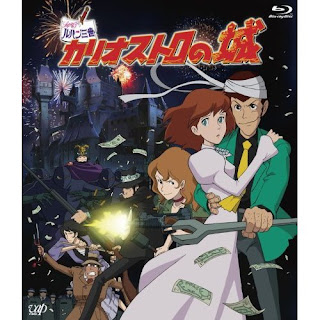 The Castle of Cagliostro was the directorial debut for Hayao Miyazaki, the Japanese anime titan.  The title character, a professional thief and a cad, was created by Monkey Punch for a manga series entitled Lupin III.  This film is actually the second of five feature films about Lupin but the only one directed by Miyazaki.

The story begins with Lupin and his partner Daisuke robbing a casino only to discover that the loot is counterfeit.  This inspires a visit to the fictional duchy of Cagliostro, rumored hub of an international counterfeit operation.  Soon, a damsel in distress comes on the scene.  Adventures ensue.  As is often the case with Miyazaki films, the plot is quite sophisticated for a children's film, though perhaps this one is better suited for slightly older kids for other reasons.  We'll get to that in a bit.

Much of Miyazaki's genius is already on full display in this early work.  Landscapes and other wide-view shots are breathtaking.  Human movements, on the other hand, are a bit more clunky than in later Miyazaki films.  Mind you, it's still pretty good by most people's standards.

Our Girl's a big fan of this one.  We don't have many rules regarding Family Movie Night but one we had to institute early on was that once a film had been chosen, no one could choose it again for at least a year.  It was an important measure for assuring variety.  Our Girl generally likes to pick movies she's seen before rather than trying something new.  It's not too surprising.  Most children appreciate the comfort of the familiar.  She'd been particular eager for this one to become available again.

Posted by The Armchair Squid at 7:28 PM