On the Coffee Table: Roger Kahn 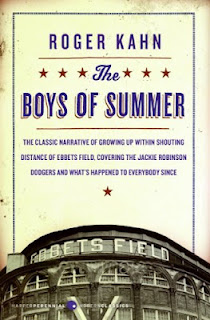 Image via By the Book Reviews

I sought out The Boys of Summer after it was recommended by a commenter on one of my blog posts - a Paul S? anyone?  His profile is no longer active.  Kahn's book consists of two distinct parts, essentially two books in one.  The first chronicles the author's childhood in Brooklyn and his early career in  journalism.  The second part of the book recounts Kahn's later efforts to track down all of the key members of the Brooklyn Dodgers from the era he covered the baseball team in the early '50s, including Hall of Famers Roy Campanella, Pee Wee Reese, Duke Snider and Jackie Robinson.

The newspaper world of the 1940s and '50s was quite different from what it is now, in as much as it survives at all.  Kahn's paper, the New York Herald Tribune, went out of business in 1966.  He climbed the rungs from copy boy to baseball beat writer on the brink of the team's glory years.

Kahn was a boyhood fan of the team, though I have discovered quite a lot of writers who have been drawn to the bittersweet tale of the Brooklyn Dodgers - seemingly ready-made for literature.  The team was awful for years, living in the oppressive shadows of both the Yankees and the hated rival Giants.  The Dodgers finally came into their own in the 1940s, but still didn't manage to win the World Series until 1955 after several close-shave heartaches.  In 1958, the team was gone - off to California. What's not for a sentimental writer to love?

Inextricably intertwined with the tale of those Dodgers is that of Jackie Robinson, probably the single greatest story in all of American sports.  Robinson started at first base for Brooklyn on April 15, 1947, effectively integrating baseball for the first time in 60 years.  Kahn knew Robinson personally (as he did all of the players featured in the book) and as such, his presentation of the story is more textured than most.  Hero?  Of course.  Transcendent figure in American society?  Most definitely.  But he was also a human being and Kahn writes eloquently of his multiple dimensions.

While the first part of the book is interesting, the real fun is in the second.  Over the course of three years, 1968-71, Kahn traveled the country to interview 13 members of the team he'd covered in the early '50s.  He asked them all how they first came to the game - delightful tales of being discovered in schoolyards and such, marvelously quaint in today's world of independent scouting agencies and consultant coaches.  The economics of player contracts have changed exponentially since the book was published so most of the retired players still had to work for a living.  Kahn also asked all of them about playing with Jackie Robinson - marvelous perspective from the people in best position to comment.

Social politics have come a long way since the early '70s.  Most noticeable is the discussion of Clem Erskine's son who has Down syndrome.  Kahn uses terminology which was normal for the time but wouldn't come anywhere close to acceptable 40 years later.  Comments on race and gender also frequently fall short of 21st century sensibilities.

Posted by The Armchair Squid at 7:30 PM