On the Coffee Table: V for Vendetta 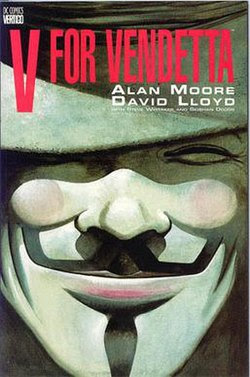 I was first introduced to the extraordinary work of Alan Moore through the film version of V for Vendetta.  For me, the movie was a wonderfully pleasant surprise - can't say I was expecting much, then was completely blown away.  Since getting into the comics hobby a few years back, I have found Alan Moore to be just about the most dependable name in the medium.  The Watchmen, Top 10 and The League of Extraordinary Gentlemen have all ranked among my favorites.

Given all that, I really should have been better prepared for the original comic book version of V for Vendetta.  Mind you, I expected it to be good.  I did not expect what I would call the most satisfying graphic narrative work I have encountered thus far.  I've been on the lookout for a benchmark against which I could measure all others.  I believe I have found it.

First published in the early 1980s, V for Vendetta is set in a near-future England.  Nuclear holocaust has destroyed much of the world and Britain is a fascist police state.  V is a masked, anarchist terrorist staging his own private revolution.  While he is certainly the central character and driving force of the narrative, most of the story is told from the perspective of others: Evey, the girl V rescued from the streets, as well as those within the establishment who are baffled in their efforts to stop V's attacks.

So, what is Alan Moore's genius?  I am far from the only one who considers him the best comic book writer ever.  What is his certain something?  Attention to detail is a very big part of it, I think.  Moore's approach seems that of a great screenwriter.  The big story is built upon the strength of individual scenes.   Words matter - all of them.  Characters matter - all of them.  Taking the broader scope, Moore is able to apply a human face to meaty political considerations.  Moore wrote V for V as a response to Thatcherism but rather than simply ranting as most of us would, he created a metaphorical reality with breath, blood and flesh.  He's far from the first to do so but few have managed it so effectively.

Moore's understandable objection to the film adaptation was the fact that his political message was twisted to suit a 21st century American audience.  The book pits anarchy against fascism.  In the movie, it's liberalism vs. neo-conservatism.  The impact on the audience is comparable but the creator's intent is irrevocably altered.  I still love the movie and am eager now to watch it again, but I must concede it's not quite the same story.

Posted by The Armchair Squid at 7:39 AM