Breakfast Around the World: Brazil

As noted in my most recent State of the Blog post, I have a new food hobby.  My Wife, herself a gifted and enthusiastic cook, has been encouraging me to find one for several years and I think I've found something to hold my long-term interest: breakfasts.  I don't just mean waffles and pancakes, either.  For the past several months, I've been researching and, as best I can, cooking what people eat for breakfast around the world, one country at a time.  I have in mind a culminating project for the next World Cup in 2018.  That's still three years, five months and three days away, of course, and only one nation has officially qualified: host Russia.  But that's no excuse not to start the fun now.

Some of our favorites from each country so far:
Our most recent breakfast explorations have led us to Brazil.  On Friday night we had a continental style spread (breakfast for dinner is big at our house).  The Purple Penguin liked the smoked turkey on bread.  I was partial to the fresh mango, though it lived up to its reputation as a wicked fruit to carve.  My Wife preferred the grilled ham and cheese sandwiches I made a few weeks ago.  I wonder if my daughter would go for grilled turkey and cheese.

The weekend's big experiment was cuscuz branco, which translates from Portuguese as "white couscous."  Combining tapioca, coconut, milk and sugar, it is most definitely white.  The ingredients took some finding and I was a little panicked last night when I realized I didn't have enough tapioca pearls. But halving the recipe seemed a reasonable choice for a family of three.  After chilling over night, it was ready for breakfast this morning, along with café com leite (aka café au lait) and hot chocolate: 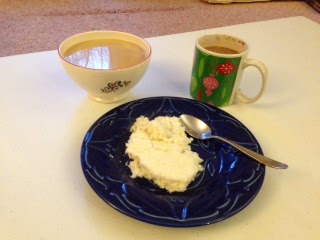 The reactions from the ladies:
It was edible.  The leftovers will make for good lunch filler in the coming week.  I won't be making it again.

I intend to learn as much about cooking as eating in this project.  As such, I've come to realize that I'll only get so far with breakfasts unless I learn to bake.  My Wife has, in fact, pushed me towards baking before.  As an experienced cook, she's comfortable with measurements like pinch, dash and splash whereas I crave precision.  Baking is for people like me.  Fortunately, I live in a house with loads of cookbooks to help me get started.

Posted by The Armchair Squid at 10:57 PM