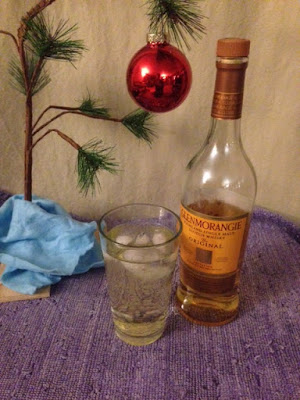 For Advent this year, my wife came up with a wonderful hobby for the two of us: exploring Scotch whisky.  This was an easy sell for me.  I adore whisk(e)y in all its forms, far and away my favorite liquor.  It was, however, a surprising suggestion from my wife.  While she likes most whiskeys, especially rye and Irish, I was under the impression that she did not care for Scotch at all.  Lucky me, she was keen to give it a go. 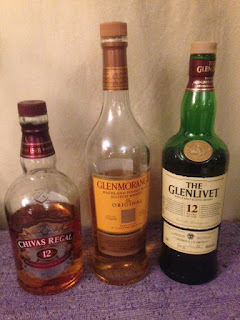 We started our adventure with three bottles, all recommendations from Becky Paskin's "Top 5 Scotch Whiskies for Beginners":  Chivas Regal 12 Year Old, Glenmorangie 10 Year Old and Glenlivet 12 Year Old.  The first is a blended whisky while the others are single malts.  The difference?  Single malt is made strictly from barley at a single distillery.  A blended combines several single malts along with wheat and/or corn whiskies.  Obviously, this a very modest sample for comparison but I would say that of what we've tasted, the single malts have more dimension than the blended.  Mind you, the Chivas Regal was still most pleasant.  Of the single malts, the Glenlivet was a bit sweeter.

As for pairing scotch with its classic mixer, the Chivas Regal is best.  The nuances of the single malts were lost when diluted.  It was still a pleasant drink with the Glenmorangie (see top photo) but better to save it for sipping. 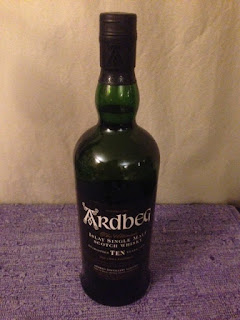 We have since acquired a fourth bottle to try, a recommendation from my wife's colleague:  Ardbeg 10 Year Old.  While Glemorangie and Glenlivet are both Highland whiskies, Ardbeg is from Islay.  We haven't tried it yet but we're looking forward to it.  In his Complete Guide to Single Malt Scotch (7th Edition), Michael Jackson rates the Ardbeg at 87.  The Glemorangie is an 81, the Glenlivet 85.