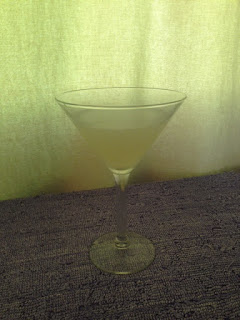 A daiquiri, in its basic form, is actually a lot like a margarita, last week's featured drink.  Rum is the alcoholic base of this one, though lime juice still carries most of the flavor.  The recipe in The New York City Bartender's Guide uses sugar syrup as the sweetener.  The daiquiri is Cuban in origin, first served in bars there around the turn of the 20th century.  The drink became popular in the United States in the 1940s.  While whiskey and vodka were rationed during the war years, rum was not.  Also, Carribean culture in general came into vogue at about the same time.  None other than John F. Kennedy was a daiquiri fan.

Rum's funny stuff.  On its own, it's every bit as warm and fragrant as whiskey.  For me, it conjures up memories of rum raisin ice cream, my childhood favorite among Baskin Robbins's 31 flavors.  But when rum mixes with fruit juices, especially citrus, its own flavor disappears.  This vanishing act is not without historical significance.


In earlier centuries, rum was a sailor's drink.  To cope with the tedium of months at sea, ship crewmen were given a ration of the stuff.  Of course, they'd get bored of the rum, too, so any stop at port provided the welcome opportunity to combine it with the local fruit juices.  You'd still get your alcoholic fix but with a more interesting taste to go with it.  Our whole modern concept of a mixed drink was spawned from this legacy.

There's a darker side to the story, of course.  As many of us learned in our history studies, rum was part of the triangular trade route that brought African slaves to the New World.  Rum is distilled from molasses, a byproduct of the sugar refining process.  Sugar production in the Caribbean was entirely dependent on slave labor.  Thus the route: slaves to the West Indies, sugar to the American colonies or Europe, rum to Africa and around again.

It's awfully heavy stuff to ponder as you sip a brightly colored, fruity, boozy treat.  There's a lot of world history in that glass and much of it ugly.  The tale is not even a new one.  The rich and powerful - and let's not kid ourselves, most of those who read this post and the man who wrote it all qualify on the global spectrum - have fed themselves through human exploitation for thousands of years.  Despite the brave efforts of some, we still do.