The Armchair Squid turns eight years old today.  It's time to hand out some hardware.  And the Squiddy goes to...

It was certainly a surprise to go out to dinner and find our senior Senator and his wife sitting at the table next to us, celebrating their wedding anniversary.  Even more delightful, the statesman told us a joke:

By conscious choice, I don't delve into politics more than necessary here at The Squid.  But the dark and depressing subject of President Donald J. Trump did come up in one of my book reviews.  There have been other disappointments this year but none compares to the big one.  Things only seem to be getting worse, too.  I don't even think I'm being partisan.  This has to be a nightmare for most Republicans, too.

Any bets as to how many months we have before they're swearing Mike Pence in as our 46th President?  Or will it have to be Paul Ryan?  Orrin Hatch?

Okay, so is it a great piece of literature?  Probably not.  But there is no series in the world for which I approach a new book with greater eagerness.  Does it even live up to the originals?  Probably not.  Does it leave me wanting more, more, more?  Most certainly, yes.

I have done my best to get back into chess, though I've slacked off of late.  I first read Yasser Seirawan's Play Winning Chess series back in the late '90s, I think.  His books are a lot more fun, and more forgiving, than most chess writing so I am glad for the excuse to revisit them.


Best Comics Find: James Sturm
Sturm is a co-founder of the Center for Cartoon Studies in White River Junction, Vermont.  One of the clerks at our local comic shop studied under him and recommended his book The Golem's Mighty Swing to us.  It's one of two Depression Era baseball books for Sturm, the other being Satchel Paige: Striking Out Jim Crow.

Honus Wagner was one of the greatest baseball players of all time, playing most of his career at shortstop for the Pittsburgh Pirates in the first two decades of the 20th century.  I read a biography about him just last month.  It was good to learn more about the man behind the baseball card. 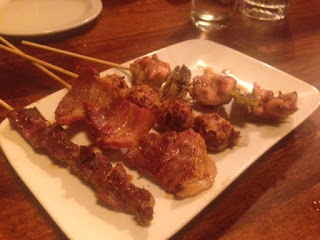 Our February trips to Montreal are always a major highlight for us and this year was no exception.  We discovered loads of new (to us) restaurants and museums.  My mouth still waters thinking of the kawa (chicken skin) yakitori at Otto, not included in the photograph because we'd already eaten it by the time we thought to take pictures.