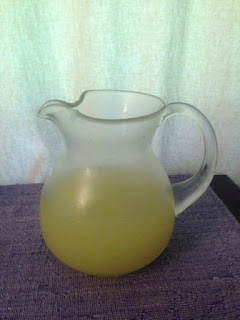 Naturally, you are all avid followers of Hungry Enough to Eat Six, the outstanding food blog of my good friend and budding local celebrity, Nancy Mock.  As such, you already know about the food challenge gatherings she hosts.  Her latest, just last month, was the 2nd Annual Taco & Maragarita Off.  This was my second year bringing a margarita pitcher.  Last year, I took the easy way and bought a mix.  This time, I made it from scratch.  The only significant difference in terms of prep work is squeezing the limes myself.

I got my basic proportions from the recipe in The New York Bartender's Guide: 3 parts silver tequila, 1 part triple sec, 2 parts lime juice.  Drink recipes are no more standardized than any other food recipes.  Charles Schumann's American Bar sets the proportions at 2:1:1, calls specifically for Cointreau as the triple sec and uses lemon juice rather than lime.  The official IBA (International Bar Association) ratio is 7:4:3.

At my wife's wise suggestion, I split the lime juice in halves between fresh squeezed and bottled.  Juicing can be hard work but I'd gotten into a bit of a groove by the time I reached my quota so it was tempting to keep going.  I stared back and forth between the limes in the bag and the lime juice in the bottle.  Laziness won out.

Cointreau is to triple sec as cognac is to brandy.  It's the same stuff, just higher quality at higher cost.  Cointreau is also a brand name.  As such, I'd rather use a lower-shelf triple sec if I can.  I had some of the higher grade on hand if I needed to supplement, thereby classing it up a touch, but didn't need it in the end.

This event was non-competitive but my pitcher went quickly so I think it passed the Basic Acceptability Test.  My wife is my most important critic.  She said it was good, though a bit strong.  I have found in general that The New York Bartender's Guide tends to make strong drinks but it's worth noting in this case that the recipe was actually lower in alcohol content than others I saw.  Next time, perhaps I would add more ice cubes to help dilute it.