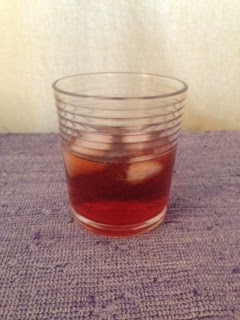 My wife found the recipe for a boulevardier at smitten kitchen, a website by Deb Perelman.  It is actually quite similar to a drink I made back in July called an old pal cocktail, also combining rye whiskey, Campari and sweet vermouth.  The proportions are oh so slightly different.  The old pal is 4:3:2 and the boulevardier is 2:1:1.  Having less Campari makes for a slightly less bitter drink which is nice.  The result is more cinnamon whereas the old pal was cranberry.  Perelman also allows for the use of bourbon rather than rye.  She isn't too fussy about combining the ingredients right in the serving glass rather than a shaker or mixing glass.  Bartending tools are fun but simplicity is nice, too.

A boulevardier is also similar to a Negroni, replacing gin with whiskey.  Paul Clarke described the difference most poetically at Serious Eats:  "A simple substitution? Hardly. The bittersweet interplay between Campari and vermouth remains, but the whiskey changes the storyline. Where the Negroni is crisp and lean, the Boulevardier is rich and intriguing."

The boulevardier was invented by Erskine Gwynne who published a magazine in Paris from 1927-32 called Boulevardier.