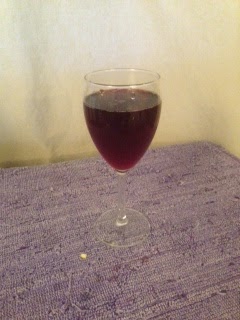 For our second date, my wife and I watched The Philadelphia Story in her New York apartment and drank kirs.  The movie has been a part of our family holiday traditions ever since (see review here), though we have not had kirs along with it quite so faithfully.  We spent Christmas week in Montreal so, as a continuation of our Advent explorations, we picked up a bottle of creme de cassis, a delicious black currant liqueur, from Quebec.  It seemed as good an excuse as any to experiment with kirs. 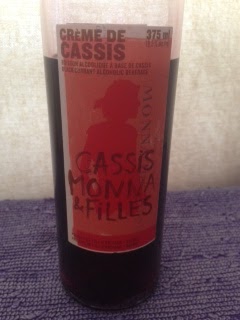 The kir royale combines cassis with champagne, whereas the regular kir features white wine.  I got my recipe from The New York Bartender's Guide.  As noted in previous posts, this guide often produces unusually strong drinks.  The recipe calls for 2 oz. of cassis, quite a lot.  It also calls for stirring after combining the ingredients so you lose the pretty cassis at the bottom effect one often sees.  Mind you, it was still yummy but too strong and not bubbly enough for my wife's tastes.  Next time, I think I'll try the recipe on the back of the bottle which calls for significantly less cassis, added after the wine/champagne and allowed to sit at the bottom without stirring.