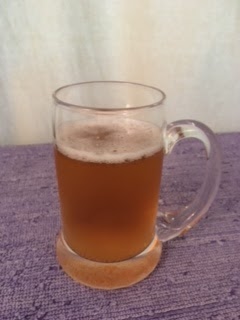 This concoction could hardly be simpler: pour the beer, pour the vodka over it, drink.  No need to stir.  "Sounds very Russian," my wife says.  My recipe came from The New York Bartender's Guide.  It tastes like beer and vodka.

Not sure I really see the point unless you've simply decided your beer's alcohol content is insufficient to your needs.  According to tradition, one is supposed to drink the whole thing in one go after a toast.  We didn't.

Yorsh dates to at least the 17th century.  Is it referenced in an anonymous Russian poem of that time period: "Tale of Woe and Misfortune."  However, the earlier version involved mead rather than beer.