As stated in my State of the Blog post, I am setting a new course in the cocktail hobby, basically hoping to hone my recipes for a few of our house favorite cocktails.  I am partial to the Manhattan: whiskey, vermouth and bitters.  There are numerous variations on the beverage, some necessitating a name change, but my own preferred combo (and, just as importantly, my wife's) involves rye whiskey, sweet vermouth and Angostura bitters.

The first matter to resolve is the proportions.  Pick up any drink recipe book and it will tell you something slightly different.  The New York Bartender's Guide suggests a rye to vermouth ratio of 3:1 with a dash of bitters.  The fussier (not a bad thing) 3-Ingredient Cocktails by Robert Simonson favors 2:1 with two dashes.  The key is the balance between whiskey and bitters in the flavoring.  I want to taste both.  In the first recipe, the whiskey is too strong, in the second the bitters.  The International Bartender's Association splits the difference with 5:2, one dash of the bitters.  I tried it with two dashes - still too strong on the bitters.  I expect in my next attempt, I will try 3:1 with two dashes. 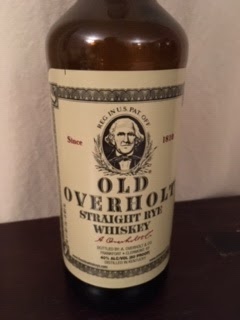 The next question is the whiskey.  Our current favored rye is Old Overholt.  In fact, it's been my wife's favorite since before we met nearly 21 years ago.  It is supposedly America's oldest continuously-made whiskey, in production since 1810.  It was originally produced by Henry Oberholzer, a German Mennonite farmer in West Overton, Pennsylvania.  I'm pretty sure that's Henry on the label.  Now, the operation is a subsidiary of Beam Suntory, the whiskey distilled in Clermont, Kentucky.  It was the favorite of at least two American Presidents: Grant and Kennedy.

It's time to branch out.  Fortunately, Maggie Hoffman provides a list of brands to try for each major base liquor in her book The One-Bottle Cocktail.  Old Overholt made her list but I'd like to try some others in a comparable price range.  Of course, any new whiskey would also have to face the high ball test but we'll save that discussion for later.

Of course, there's also the not-to-be-neglected matter of the cherry garnish.  There are loads of maraschino brands to try.  Restaurants often serve Manhattans with a brandied cherry.  One can buy those, too, though I'm also curious about making my own.

So that's where things stand at the moment.  I will post updates as the experiments continue.