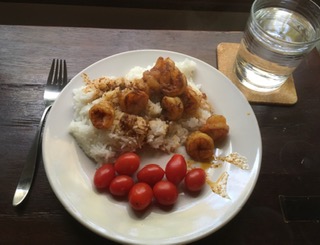 This is a variation on the Shrimp Scampi recipe from Mark Bittman's How to Cook Everything: The Basics (see here).  I really enjoyed this version, even preferring it to the original - lots of flavor, worth remembering as I look to pump up my other dishes.  I didn't realize until opening the drawer the wide variety of paprika my wife keeps on hand.  That would be a fun exploration sometime.  For the shrimp, I just grabbed the first one I saw - worked just fine.


Tinkering at the Bar

The other night, my wife came home excited by the idea of whiskey sours.  I've made them before (see here) with some success but still worth experimenting.  As noted in my previous post, the New York Bartender's Guide recipe was quite sour indeed and not surprising with a 2:1 ratio of whiskey to lemon juice.  Robert Simonsen's recipe in 3-Ingredient Cocktails isn't too far off: 8:3.  But rather than a mere teaspoon of sugar syrup, Simonsen recommends equal parts with the lemon, making for a significantly sweeter drink.

The result was quite nice, better balanced with a strong voice for all three ingredients.  I even got a bit of the bourbon fumes in the nose, a pleasant jolt.  Simonsen does not use a garnish but I did.  We like cherries.