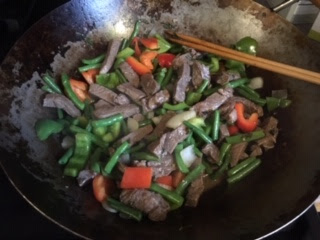 This is a variation on the stir-fried beef with basil and chiles from Mark Bittman's How to Cook Everything: The Basics (read here).  I added onions, green peppers from my band director colleague's garden, red peppers and green beans.  It was fine but I think I'd like to find ways to boost the flavor of the sauce.  Basil, onion, garlic, crushed red pepper, lime juice and soy sauce should be plenty and yet, it still lacked the Wow! factor.  I don't want to resort to the corn starch that makes the bottled stuff so goopy.  Maybe just more of something?  More heat perhaps.  I don't know - might require some experimentation.

My wife did make one request: thinner slices of beef next time.  I thought the thicker pieces were kind of nice but she thought they were harder to eat that way.  Fair enough.  Duly noted.

One of my favorite exercise activities is racquetball.  I first learned the sport in college, actually took a class.  I hadn't played much since until a few years ago when some friends took it up and invited me along.  We have a reasonably consistent group of four these days, two of whom have been featured in The Squid before: Mock (sadly hasn't blogged in years) and Blue Liner.  Our fourth we shall call simply Racquet Man as he is the best player among us.  I generally run a comfortable second strongest, I think.  I try to keep RM's superiority in perspective: he's 15 years younger than I am and a far more active athlete.  It's a friendly group, though competition can get intense.

We try to play once a week.  Last year, that didn't work out so well for me but with a few shifts in the schedule, I think I can make it work better this year.  So far so good.  It's a fantastic way to pad the FitBit stats!

Otherwise, I can say it's definitely harder to stay motivated on the FitBit goals as the cooler weather and the shorter days creep in.  There were two nights this past week when I fell short.  In both cases, I chose going to bed instead.  Mind you, sleep's important, too.  But big picture, I want both the exercise and the sleep.  So, I'm trying to think of good motivators to stay up.  I think the baseball playoffs might help - something to do while jogging in place.  Plus, I have all of those Star Trek episodes to watch.