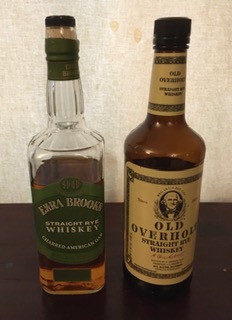 Ezra Brooks Straight Rye Whiskey is a relatively new product on Vermont's liquor store shelves.  It is $4 cheaper than our former standby, Old Overholt.  Therefore, it presents a meaningful challenge as a staple rye for when none of the higher-priced brands - George Dickel, for instance - is on sale.  Worth noting before we dig in: the Ezra Brooks is 90 proof whereas Overholt is 80.  Let the whiskey battle begin!

On the Rocks Test

Both whiskeys were perfectly nice straight.  Brooks was more bitter while Overholt was both sharper and fruitier.  Call this one a tie.

My wife tasted both blind and found the Ezra Brooks to be smoother.  I thought it more flavorful.  I let her finish the EB one while I finished the Overholt.  She accepted, with apology.

A blind test again.  This time, she found the Overholt smokier and preferred it.  We both agreed, though, that the ginger beer was once again the more dominant flavor, the whiskey difference essentially negligible.  We used Otto's again.  At some point, once we've settled on a whiskey, we'll do some ginger beer tests.  The main thing we've learned so far is that there's no harm in sticking to the cheap stuff.

Far and away, we consume most of our whiskey via Manhattans so the Brooks is the clear winner, especially with the difference in price.  Looks like the end of the road for Old Overholt at our house - kind of a shame but what can you do?  The change in recipe was not a good choice for the brand.
Posted by The Armchair Squid at 1:00 AM