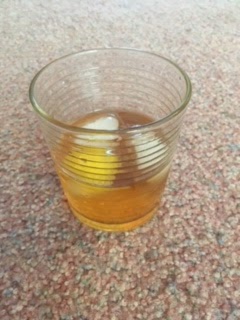 I got my Sazerac recipe from The New York Bartender's Guide: bourbon or rye with Pernod, sugar, Angostura or Peychaud's bitters, water and a lemon twist.  I chose rye and Peychaud's.  In fact, the latter was the initial inspiration for the drink.  We've had a bottle for a while but I don't think I'd actually used it yet - not that we were able to taste it much.  The Sazerac is named for the brand of cognac which served as its original base liquor.

The Pernod, an anise-flavored apéritif, was definitely the dominant flavor even though there's only a scant amount in the mixture: a mere half-teaspoon against three ounces of whiskey.  We're not big black licorice fans so a little bit of anise goes a long way.  The drink was enjoyable, though definitely strong.  The preparation is a bit fussy.  One coats the glass with the Pernod before adding anything else.  One must muddle the sugar, too, which is tedious.