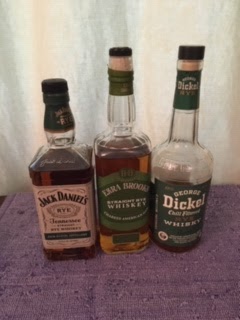 Two untested rye whiskeys in our price range are on sale in Vermont liquor stores for June: Jack Daniels Tennessee Rye and Ezra Brooks Straight Rye.  We picked up a bottle of each setting up, for now, our final whiskey battles...

This was a particularly important battle.  Brooks is definitely a lower-shelf brand than most of the others we've tested.  At full price for each, Brooks is $12 cheaper than Dickel.  Brooks is a perfectly nice whiskey, having already triumphed over Old Overholt, our original favorite (read here).  And $12 really is rather a lot.  So, even if Dickel should win, it's likely only going to be our "when it's on sale" choice while Brooks remains our staple.

Well, what do you know?

My wife was quite surprised to find that she preferred the Brooks in the blind test.  What's interesting is that she'd never described Dickel as smoky before and, in fact, wouldn't have considered the word a redeeming adjective for a whiskey.  Nonetheless, her choice was clear.

No complaints here.  The preference will save us money.  While I think the other brands might be nice for a change of pace once in a while, our rye of choice is both tasty and affordable.  Everybody wins!

Next up: Vermouth Battles