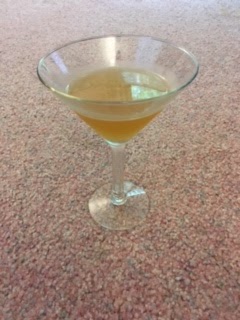 An amaretto sour combines amaretto, an almond liqueur, and lemon juice.  I got my recipe from The New York Bartender's Guide.

As discussed last week, I am developing a cocktail for my friends Mock and Nancy Mock to celebrate their 20th wedding anniversary.  In our previous installment, my wife had suggested more almond and less lemon in a vodka sour variation.  I decided to ditch the vodka and orgeat syrup in favor of amaretto.  Looking around online, it would appear either lemon or lime juice is acceptable for an amaretto sour so we tried both.

I made the lemon (photo above) first.  My wife's reaction was a simple "lovely."  She did think, however, that it might still be a little too sour.  The lime was even better.  I've written this before: lime and almond are an astonishing combo, definitely a whole more than the sum of its parts situation.  The flavor explodes spectacularly in your mouth.  But this time, perhaps not sour enough.