A vodka sour combines vodka, lemon juice and sugar.  I got my recipe from The New York Bartender's Guide which calls for both cherry and lemon slice garnishes.  Wanting to conserve lemons, I went with just the cherry. 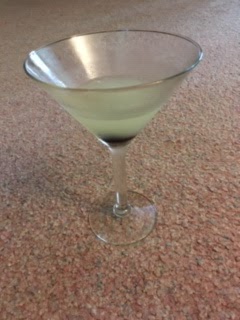 The drink is definitely sour.  Apologies for the photo.  I'd already finished about half of it before I remembered to take one.

The vodka sour was the first step in a broader project: designing a drink for my friends Mock and Nancy Mock for their 20th wedding anniversary.  They both expressed interest in a sour drink.  Naturally, my wife is my expert taste tester so I asked what, if anything, she felt the drink was missing.  She suggested orgeat syrup so I added 1/2 oz. for version 2.0.

The result was interesting.  As discussed in previous posts, lime and almond is a magical combination and lemon and almond isn't half bad either.  This time, my wife advised more almond, less lemon.

Tune in next week for the next stage in the process.

Noilly Prat vs. Boissiere
Boissiere is a relatively new product on Vermont shelves.  Originally developed in France in 1857, the company moved over the Alps to Turin, Italy in 1971.  The infusion includes elderflower, chamomile and coriander.

My wife initially picked the Boissiere but said she could go either way.  I would say it's an even split for me.  The Noilly Prat was a touch sweeter, not necessarily a good or bad thing but I have found that sugar detracts from the other ingredients.  I feel part of the beauty of a Manhattan is the equal partnership of whiskey and bitters.  The vermouth's role, as discussed previously, is more important than I would have expected.  It doesn't need to supply much additional flavor but it also shouldn't detract from the balance between the others.  So, give the Boissiere a slight edge, bolstered by the fact that it's also $1 cheaper.


Posted by The Armchair Squid at 1:00 AM