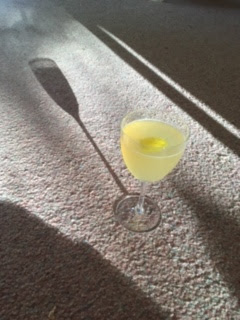 A Bee's Knees is a Prohibition-era cocktail invented by Frank Meier, head bartender at the Ritz in Paris in 1921.  I've seen a lot of different recipes around.  I got mine from David Lebovitz: gin, honey syrup, lemon juice and "Covert, amaretto or another liqueur" with a lemon twist garnish.  With such vague specifications for the liqueur, this is a drink that invites broad experimentation.
The first night we tried it (a few months ago at this point), we did two rounds.  For the first, we did amaretto which was lovely.  I'm a big fan of almond flavoring in general and it brought a warmth to the party here.  The honey is quite expressive.  Overall, I'd say the flavor is reminiscent of baby aspirin, though that sounds less enjoyable than it actually is.  For round two, I didn't have enough amaretto so I split it with triple sec.  It was still nice but there was more depth with amaretto alone.  The lemon was more prominent in round two.
Posted by The Armchair Squid at 1:00 AM