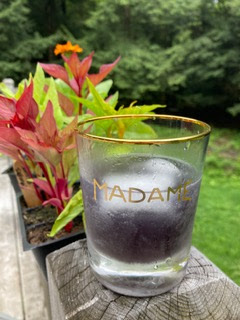 A Mai Tai combines dark rum, light rum, Curaçao, lime juice, grenadine and orgeat syrup.  I got my base recipe from The New York Bartender's Guide, then added Jamaican No. 1 bitters as a test of my Bitters of the Month.  I only had blue Curaçao on hand, thus the dark color.  My wife suggested it could be a Goth Mai Tai.  I see it as more deep purple than black so I thought of Smoke on the Water.  Either would be a designer cocktail idea worth pursuing.
The Mai Tai was invented in California in the 1930s or '40s, though exact origins are in dispute.  The cocktail had its heyday in the 1950s and '60s, its popularity enhanced by the Elvis Presley movie Blue Hawaii.  The name is most likely derived from maita'i, the Tahitian word for good or excellence.
The drink is very sweet.  A drier Curaçao would probably help with that, too.  Generally speaking, I don't find rum drinks as interesting as whiskey drinks - less dimension.  As for the bitters, we didn't taste it much.  More would be better.  Maybe when I work on that Goth Mai Tai, I'll add more.
Posted by The Armchair Squid at 1:00 AM