An exploration of ciders inevitably leads beyond apples to the world of pears.  As a table fruit, I've never been a huge fan of pears - too mealy.  But as an ingredient in things - tarts for example - pears are lovely.  Texture certainly isn't a problem in liquid form so there's no reason a pear cider couldn't hold its own in my arena... 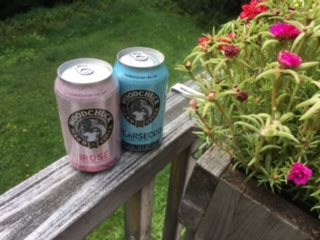 Rosé vs. Pearsecco
Two Woodchuck Cider products go head to head.  Pearsecco is actually one of two pear ciders in Woodchuck's line.  The other is simply called "Pear."
It was a clear choice for both of us.  Pearsecco is drier, yet also, more fruity.  There's more added sugar in the Rosé so the Pearsecco actually tastes more like a pear than the Rosé does like an apple.  So...
Winner and New Champion, Sipping Cider Category: Woodchuck Pearsecco
If we try the Pearsecco in the D-Day Swizzle, I think I get to call the drink something new.  The David Lebovitz recipe clearly specifies apple cider, not pear.
Posted by The Armchair Squid at 1:00 AM