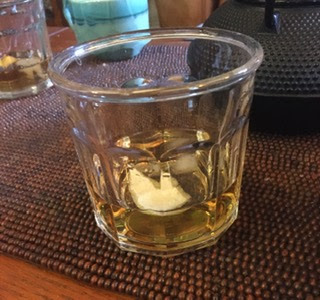 Mon Nouvel Ami is David Lebovitz's variation on the Old Pal Cocktail, substituting Dolin red for Campari.  Lebovitz published his recipe in his Drinking French book.  The result was a less bitter drink.  My wife described the Dolin as more botanical in flavor.
Largely because of the Lebovitz recipe, I've had my eye out for Dolin for a while.  Technically, it's a vermouth, though more flavorful - and more expensive - than the usual offerings.  It's not available in Vermont liquor stores so I always keep an eye out for it when we're out of state.  Wouldn't you know, I'd find a gem of a liquor store in Northampton, Massachusetts: State Street Wine, Beer & Spirits.  I was able to cross off a decent portion of my wish list so stay tuned.
Posted by The Armchair Squid at 1:00 AM