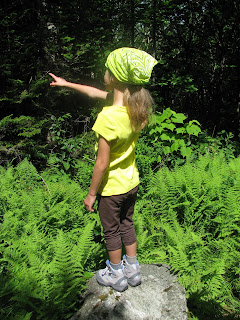 On Saturday, we went for a hike at Underhill State Park.  Here is My Wife's writeup:

There were indeed quite a lot of waterfalls on the hike.  My Wife is keen to try a hike to the Mount Mansfield summit but I am feeling timid.  I believe in working your way up to such things and I don't feel we're quite there yet.  I think I've convinced her that we need at least one more moderate hike before we tackle the difficult ones.

On Sunday, we spent a leisurely afternoon with the Mocks by their pool.  After a hot week, the day was a pleasant one for being outside.  We played a seven-hand game of UNO, one of my daughter's favorites, though we usually only play one-on-one.  It's completely different with a big group and a lot of fun.  Mrs. Mock won.

We played Pandemic, too.  We won but as the ever-observant Mock pointed out, we've been playing one rule incorrectly.  For those who know the game, we've been using the Forecast Card incorrectly, looking at the next six cards in the Player Card deck as opposed to the Infection Card deck.  The card, of course, clearly states what you're supposed to do but I think in our eagerness to avoid Epidemic Cards, we read what we wanted to read.  It's too bad.  I like our way.  I guess we'll have to play it the right way from now on...

We tried out a new restaurant on Friday night: Mimmo's in Essex Junction.  I love a dive Italian restaurant and while Mimmo's is a bit too upscale to qualify, it hit the spot.  My go-to dish for Italian food is Chicken Parmagiana and theirs was very good.  Our favorite dive Italian place in the area is Papa Frank's in Winooski.  We used to live within walking distance but alas, it's a bit out of the way for us these days.

Kickball was less successful this week.  We lost 8-4.  Part of the problem was that two of our most athletic players were out of town but we just didn't play well - self included.  I did get to play a lot due to the absences.  I think first base is still my favorite, though I'd like to get better at it.  We only have two more regular season games left.
Posted by The Armchair Squid at 11:11 PM