On the Coffee Table: L.M. Montgomery 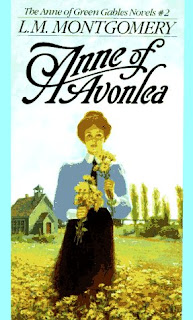 Image via Stuck in a Book

I read the first Anne book as part of my 12 Books in 12 Months project, begun last summer.  I was thoroughly charmed by Montgomery's precocious redhead and Anne has played a very interesting role in my year since.  I just finished the second book of the series this past week while we were on vacation in Prince Edward Island (more details to follow in a future post).  I can't deny that it was particularly meaningful to read the story in its own beautiful setting.  One fully appreciates the glistening landscape of summer in the Maritimes as it was so exquisitely described by Montgomery.

For those unfamiliar with the story, Anne of Green Gables leaves off as our heroine is about to take on her first teaching job at the Avonlea School at the age of (gulp!) 16.  Anne of Avonlea covers the next two years.  Many new friends are introduced: the new neighbor, Mr. Harrison, and his vulgar-tongued parrot; Anne's prized pupil, Paul Irving; the endearing Miss Lavender and her quirky maid Charlotta the Fourth among others.

As I wrote regarding the first book, Anne Shirley reminds me of a lot of women I've known in my life - many of them huge fans of these books.  As such, I feel that getting to know her helps me to better understand my own life.  She is an unusual female character for the early 20th century, celebrated for her wit, eloquence and imagination.  Montgomery was careful, though, not to make her perfect.  She suffers from insecurities like any of us.

Full disclosure: My Wife tried Anne of Avonlea as a read aloud with Our Girl not long ago and couldn't even finish it.  The first book had been a big success for both of them so it was worth trying the sequel.  I guess it was a bit too precious for My Wife's tastes.  While I can understand that sentiment, it didn't bother me as much.  I must admit, though, that I'd love to see a Saturday Night Live interpretation of Anne Shirley - what her friends really thought of her.  Not surprisingly, My Sister didn't like that idea.

I am certainly up for more.  I picked up a copy of the next volume, Anne of the Island, at the Green Gables gift shop on PEI.  It was a great trip.  I promise to share more details soon.
Posted by The Armchair Squid at 12:39 AM