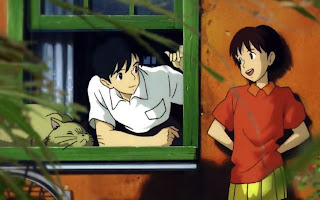 Whisper of the Heart is one of a long line of high quality films produced by Japan's legendary Studio Ghibli.  The studio's leading light, Hayao Miyazaki, served as screenwriter for this project.  The story is based on a manga, Mimi o Sumaseba (translates literally as "If You Listen Closely").  It is the coming-of-age tale of Shizuku, a junior high school student in western Tokyo.  Typically, late junior high (the 9th grade by American reckoning) is a pivotal moment in Japanese life.  Up until that time, most people go to their neighborhood schools.  In the 9th grade, all students take the notoriously difficult entrance exams for high school.  For better or for worse, one's life path is largely determined by the results.  For the more free-spirited individuals, the moment is ripe for an identity crisis.  That is where we find both our heroine and Seiji, her new love interest.

Whereas most Ghibli films are fantasies, Whisper of the Heart is firmly rooted in the everyday.  For me, it's a trip down memory lane.  As noted in previous posts, I taught English in Yokohama from 1996-98.  As such, the western side of Tokyo is very familiar to me and this movie provides an astonishingly authentic immersion.  The school, the narrow streets and the apartment buildings could all just as easily have been plucked out of my own Yokohama neighborhood.  Even the sounds - buzzing cicadas and train noises - are spot on.

The authenticity of setting is almost enough for me to give this film a 4 rather than a 3.  The only reason I haven't is that the story does feel a bit long by the end.  I'm not sure I would want to sit through the whole thing again. Regardless, if you're looking for a glimpse of the real Japan, particularly for that time period, you could hardly do better than this.  Consider it a high 3.

Further endearing the film to me is the extensive use of "Country Roads" in the story - one of my all-time favorites and the best homesickness song I know:

Sadly, this was the first and last film directed by Yoshifumi Kondo.  He died of an aneurysm in 1998 at the age of 47.  While this was his only film director credit, his animation resume is extensive.  He served as animation director for many Ghibli projects, most notably Kiki's Delivery Service and Princess Mononoke.

Posted by The Armchair Squid at 10:20 AM