On the Coffee Table: Zot! 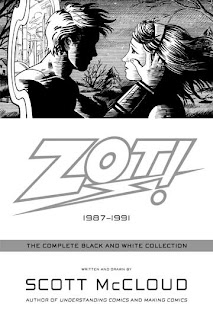 Scott McCloud has made his biggest splash in the comic book industry with his non-fiction works, all previously reviewed here at The Squid:  Understanding Comics, Reinventing Comics and Making Comics.  However, he earned his cred in the trenches.  Zot! was his best-known fiction comic.  The series ran for 36 issues total, the first ten in color, the final 26 in black and white.  The collection I just finished includes the black and white issues only, originally published 1987-91.  Issue #11 was essentially a reboot so this volume encompasses a more or less continuous story.

Zot is a teenage superhero from an alternate Earth.  Jenny is his contact in our world.  Their relationship is complicated.  Naturally, that's half the fun of the series.

But there's more - a lot more - to this seemingly simple premise.  The series begins as a reasonably straight-forward, light-hearted exploration of the comparisons between Jenny's and Zot's dimensions.  However, things get a lot more interesting when Zot gets stranded on Jenny's (our own) Earth for a year.  Comic book convention is chucked out the window as McCloud digs into the complicated lives of Jenny's friends.  Their problems are very real, and a few of them still difficult to talk about in some circles two decades later: alcoholic and verbally abusive parents, divorce, confronting racism and homophobia, etc.  For all of the fantastical elements on offer with Zot!, it's these brutally human stories which ultimately make for a memorable, compelling series.

The artwork throughout is outstanding.  McCloud drew inspiration from the Japanese manga aesthetic, especially the work of Osamu Tezuka.  McCloud is a master of the black and white medium, creating lush, detailed panels in a variety of artistic styles.  A worthy example:

Image via Notes from the Playground

Posted by The Armchair Squid at 12:13 AM