The idea for this book is clever.  The story is told from the perspective of two baby twin girls.  The language they hear from their parents is, for the most part, gibberish.  Occasionally, though, recognizable English words creep in to reflect their increasing comprehension.

Particularly for a story of young life, the atmosphere is quite dark.  Brown's minimalist style and dark backgrounds provide a different world from the idealized view we usually see of parenting and childhood.  Of course, this is not a book for children.  While the joys of parenthood are numerous, those of us who have been through the wars know that there can be long stretches of loneliness, tedium and frustration.  Rarely do stories portray the very real struggles to communicate with a non-verbal entity.

In the end, one book is enough for me.  Apparently, other readers felt the same way.  Brown abandoned the project unfinished after the eleventh issue in 1997. 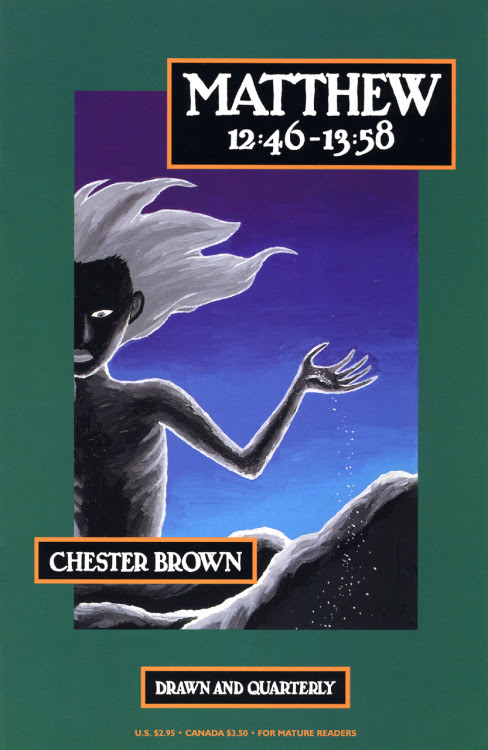 Image via The Adventures of Mr. Phil

Flip the book over and a second story is offered from the back cover, upside-down: a comic interpretation of the Book of Matthew, verses 12:46-13:58.  A biblical scholar, I am not.  Also, I generally prefer to avoid religious and political topics on my blog but this is too fascinating an idea to ignore.  From an artistic perspective, there's not much here to either inspire or offend.  The material is presented without embellishment.  With the comic's discontinuation, so ended the adaptation of Matthew.  Issue #11 carried the gospel through 20:29.