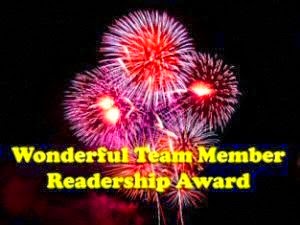 The eternally awesome Stephanie Faris nominated me to receive the Wonderful Team Member Readership Award.  I am both humbled and honored.  I love the spirit of this particular award and proudly accept it, especially given Stephanie's wise modifications.

The intent of the award is to celebrate the wonderful community that is the blogosphere by honoring those who contribute to it.  I am a happier blogger for the five people I am nominating.  I write better knowing that they may be reading.  I am also grateful for the friendly spirit each of them brings to our circle.  I'm going to make one further amendment to the award.  None of you has to pass this on in order to accept it.  That's just how awesome you are!

I don't know if I'd even still be blogging were it not for Mock.  For a long time, and I mean probably the first two years, he and my wife were the only people reading The Squid with any regularity.  He was easily the most frequent commenter.   He is also the one who discovered bloghops like A to Z where we were both able to broaden our networks.  Mock is one of my very best friends in the real world, too, and I am grateful for the role he plays in my life every single day.

You likely already know Suze because she is a socializing dynamo.  I first met her through the Tumble 4 Ya Blogfest she co-hosted (another Mock find).  She has been a devoted reader, an inspiring cheerleader and a wonderful friend ever since.  I can't call her The Crazy Lady in New Mexico any more because she moved but her awesomeness hasn't diminished one iota.  She also introduced me to my next two nominees.

Speaking of big moves, Cygnus and his family are in the midst of one so go wish him luck over at his blog.  Dungeons & Dragons and other role-playing games lie at the heart of Cyg's blogging enterprise and he seems interested in all things magical and mystical.  He brings both intelligence and warmth to his interactions with other bloggers.  It always feels like we're sitting around on a dorm room floor pondering the mysteries of the universe.  Pass the Doritos, man...


Geo. - Trainride of the Enigmas

Geo. is an hilariously sage blogger out in California.  He also looks like a young Kurt Vonnegut so he oozes awesomeness by simply existing.  Like Cygnus, he is far better connected to the infinite than I. Anytime I can inspire a comment from Geo., I know I'm on the right path.

I actually don't remember how I first found Maurice but I'm so glad I did!  He and Nigel Mitchell share the excellent blog The Geek Twins but Film Sketchr is one of the blogosphere's best kept secrets.  There, Maurice spotlights the art designers of science fiction movies - you know, the people who do the real work for the films we all enjoy.  Maurice also has a wonderful gift for expressing a friendly demeanor.  I always feel like his comments come with a warm smile.  He's that guy you always hope you'll run into at the comic book store.


Wow, looking again at the list above, that's a dinner party I'd host anytime!  Thanks again to Stephanie and to all of you who make blogging so much fun.

Posted by The Armchair Squid at 10:47 AM