On the Road: Pastéis de Nata 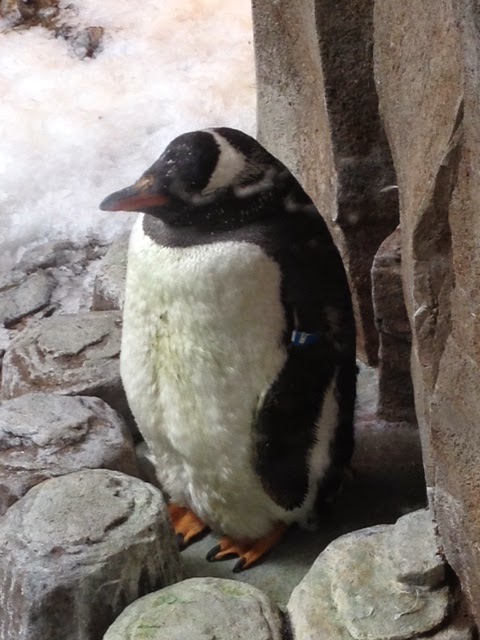 Our new February break tradition is a short family vacation in Montreal.  The city is just a couple hours from our house in northwest Vermont, yet it is an entirely different world: urban, multi-lingual, cosmopolitan, etc.  A couple days is enough to provide an escape from our much quieter country life, and also to remind us why we chose it.  A few highlights from this year's trip:

The city of Montreal doesn't have a zoo, exactly.  Instead, it has the Biodome.  The animal exhibits are divided into four replicated ecosystems:  Tropical Forest, Laurentian Forest, The Saint Lawrence Marine Eco-system and a polar area divided into both Arctic and Antarctic.  Within each zone, the animals wander more or less freely.  Climates are carefully controlled so the tropics are warm and humid whereas the Laurentian zone is set for brisk autumn.  There are a few larger mammals and reptiles.  We saw caimans and a capybara in the tropical zone.  Most of the animals in the Lauentian forest were asleep, including a Canadian lynx, whom we had seen on a previous visit.

Most of the animals on offer are birds.  The tropical ones are the most colorful, including turquoise tanagers and scarlet ibises (surely on the short list of the world's most beautiful animals).  There are puffins in the Arctic and penguins in the Antarctic.  The latter, of course, were our main reason for coming.  As mentioned in previous posts, our daughter is penguin-crazy.  The Biodome has four penguin species in all, including the regal king penguins.  The display is not as engaging as the the one at the New England Aquarium in Boston.  There is plexiglass between birds and humans.  On the one hand, it allows one to be physically closer to the birds and surely helps with climate control.  But there's something nice about being in the same room with the penguins, hearing them, smelling them, almost feeling they could splash you if they felt like it.  Even so, we were glad to see them.

My main objective for the trip was the Pâtisserie Notre-Dame du Rosaire, a bakery that specializes in Portuguese treats.  As discussed here, I am currently exploring breakfast traditions around the world.  The Portuguese are into pastries and when I looked up the recipe for the favorite choice - pastéis de nata - I instantly realized it was beyond my own current baking capabilities.  While I might learn to make them eventually, best first to try one to see if they're worth it. 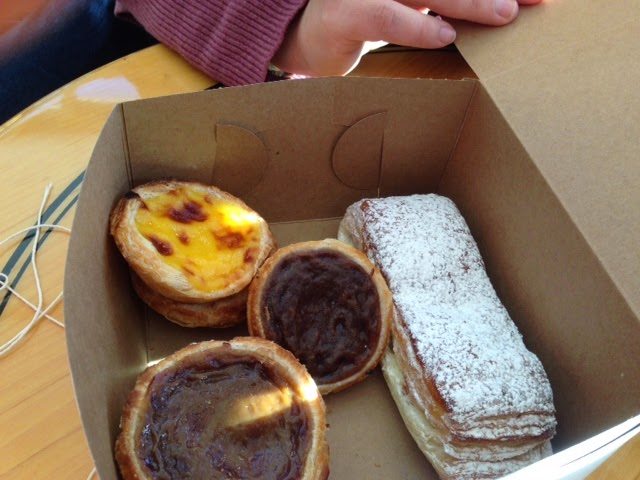 The bakery was different from what I expected - better.  The website suggests a sleek, modern operation with the usual French varieties with a few Portuguese offerings.  But the reality is a more quaint shop in a traditional ethnic neighborhood known as Little Portugal.  The natas consist of an egg custard in a tart shell.  The pâtisserie had the traditional, sugar custard (top left corner) but also other options including maple (a Canadian variation?) and chocolate.  Verdict: they're delicious and well worth learning to make myself someday.

Our best meal of the trip was our dinner at Saka-Ba!, a ramen restaurant in the Mont-Royal neighborhood.  I yearn for the traditional noodle shops I knew in Japan and, not surprisingly, have never been able to find quite their equal in North America (though there is a place near the Time-Life building in New York that comes close).  The reviews for Saka-Ba! were good so we had high hopes.  The food was excellent.  My kimchi ramen was outstanding, and so spicy I couldn't even finish it.  In my book, that's a very good thing!  The ladies both went with more traditional choices and were thoroughly satisfied.  The atmosphere was less pleasing - more singles bar than homey Japanese izakaya.  Come to think of it, the atmosphere of the bakery was really what I wanted for the ramen shop, too.  Oh well, you can't have it all.  The noodles were plenty good enough to make up for the noise.

Overall, it was a most enjoyable visit.  We stayed closer to downtown this year at the Hotel Quartier de Spectacles, right on Rue St. Catherine and just around the corner from the nearest subway station.  We didn't have quite as nice a room this year but breakfast was better (though not included gratis).  As ever, it's nice to be back home but I look forward to future Montreal adventures.