On the Coffee Table: Tony Isabella 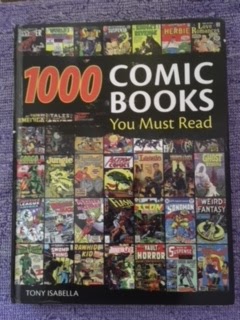 I have an inscribed copy of this book, gifted to me by Mock and Drama Guy for my birthday five years ago - just for a glimpse into how deep my TBR shelves run these days.  Isabella has been working in comics, mostly as writer and critic, for decades.  His proudest creation is the DC superhero Black Lightning, intended to address the lack of positive Black characters in the comics of the late '70s.  He was inspired, in part, by television's Welcome Back, Kotter, also a comic series for which Isabella had written.

I doubt this book will turn me into a collector.  Having dabbled in the genre for a few years now, I've got a pretty good idea of what I like.  That said, the history presented here is excellent and a lot of it new to me.  The titles are categorized by decade and each chapter begins with the historical context.  The first book listed is Action Comics #1, the first appearance of Superman, June 1938.  While Isabella acknowledges the existence of sequential art for millennia preceding, he submits Superman as the launch point of the industry as most American consumers know it.  The most recent publication featured is Bruce the Little Bruce Spruce, December 2008.

There's a decent variety on Isabella's list, though a more Squid-friendly selection would have featured more international titles, especially Japanese.  I have read several in his compilation and have a couple more on the shelves waiting for me.  I expect the book will be a good reference and will also be good for ideas should I decide to expand my horizons.