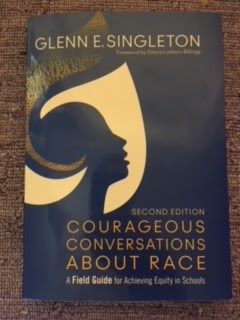 Courageous Conversations about Race is our assigned professional summer reading for work.  For unfortunate reasons, our school district has been forced to confront racial issues head on over the past 15 months.  In truth, the conversation is long overdue.  The minority population in our northwest Vermont exurb is small which creates its own problems for our few students of color.  Singleton's book encourages educators to consider race in isolation rather than in combination with economic and linguistic factors.  He argues, convincingly, that schools too easily shy away from blunt conversations of race, preferring to hide behind easier topics.  The fact is, the achievement gap for students of color is dramatic even when controlling for income or parents' education level.

While the topic is undeniably worthwhile, I do have a few issues with the book.  As with Daniel Goleman's Working with Emotional Intelligence (reflection here), there is a slightly uncomfortable commercial element.  What Singleton would truly like is for you to hire him to lead workshops.  However, unlike Goleman, Singleton offers plenty of how-to material to do it on your own.  One of the agreements of his process is to accept non-closure.  He promises no particular outcomes, stressing the importance of the conversation itself in all its uncomfortable glory.

The material is frequently dry but the best parts are the personal reflections at the end of each chapter.  Various contributors, including the author himself, wrote essays on their own racial experience.  As part of the process, Singleton encourages participants to do the same.  And so, my own humble offering:


I am White - deeply White.  My own olive-skinned wife calls me The Alabaster Kid.  All of my ancestry is northern European: Danish, English, German, Scottish, Welsh.  Most of the time, I don't give much thought to my own race which is, of course, the very essence of White Privilege.  Most of the time, I don't think about it whereas people of color rarely if ever have that luxury in American or European society.  I have nearly always been more aware of other people's races than my own.

The one period in my life when I was hyper-aware of my own race was the two years of my young adulthood spent in Japan.  Being a White American in Japan feels a bit like I imagine being a celebrity would.  You can't go anywhere without being noticed.  While certain parts of Tokyo are international enough to provide adequate camouflage, I stood no chance of blending into the crowd in my quiet Yokohama neighborhood.  Reactions from strangers on the street ran the gamut: fascination, curiosity, admiration, astonishment, fear and occasional hostility from those who knew enough to resent the American military presence in the area.  In the beginning of my stay, it was fun, even amusing.  By the end, it was tiresome.  I would long for time in Harajuku or Roppongi where I could enjoy relative anonymity.

I know better than to believe my experience was remotely equivalent to that of a Black man in the United States - or even a Black man in Japan, for that matter.    Often, foreign men in Japan (gaijin) would compare notes upon meeting each other.  The Black guys would report a lot more fear in people's reactions than I ever saw.  To be sure, prejudice crosses borders and oceans effortlessly.

Here, I just don't think about it most of the time.  But Singleton's book forces me to look back on my life to times when I undoubtedly benefited from White Privilege in ways I wouldn't have considered before.  There were times when I struggled in school growing up, years when the grades weren't so great.  Everyone around me assumed I would bounce back even when I didn't believe it myself.  I realize now that may not have been the case if I had been a person of color.  The struggles might have suited the stereotype and the system might well have handled me differently.

For my students, I need to listen and be more aware of their challenges.  It can't be easy to walk into a school everyday where none of the teachers and few of the students look like you.  It's more than sticking out and people saying mean things, though that really does happen frighteningly often.  People's expectations for you are different.  Do you internalize those expectations?  Rebel against them?  A little of both?  Something else entirely?  I won't know until I listen and, as Singleton stresses in the beginning of his book, believe what they tell me.

I don't believe in "woke."  I fear it implies that awareness of racism is enough.  If I am woke to anything, it is to how much I have to learn.

I do know I'm ready to listen.