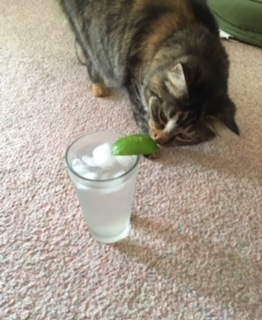 Sometime, it might be meaningful to taste a vodka tonic and a gin and tonic side by side.  The quinine flavor of the tonic water is so dominant that the base liquor hardly matters.  Mind you, both are lovely, refreshing beverages.  My recipe came from The New York Bartender's Guide.

Quinine came into prominent use as a preventative against malaria.  It is potently bitter so in the 19th century, British officials in India and other tropical outposts started mixing it with soda water.  What we know as tonic was born.  Adding alcohol was the next logical step: first gin, later vodka.

Vodka and tonics feature prominently in this Elton John classic: