On the Coffee Table: David Wondrich 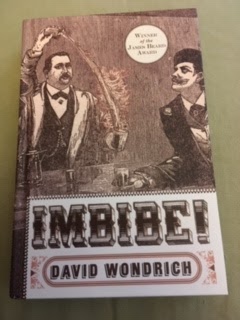 Imbibe! is a history of the cocktail in the United States, largely but not exclusively focused on the life and work of Jerry Thomas, a famous and influential 19th-century bartender, otherwise known as The Professor.  Most important to history, Thomas was the first to publish a cocktail bar book.  Included in Imbibe! are numerous recipes representing each stage of pre-Prohibition mixocological evolution.  Many of the recipes are Thomas's own, though not all.

Traditionally, a cocktail is defined as a base liquor combined with a sweetener and bitters and came to be understood as such in 19th century America.  Mixed drinks, however, extend back further, some would argue to antiquity.  Wondrich begins his history in the late 18th century with punches drunk in communal bowls, eventually evolving into single glass servings.  Bitters was the last of the three key ingredients to join the party, adopted from the apothecary's drawers of magic elixirs.  Because of this connection to medicine, the bitters provided the illusion of health benefit.  The original bitters-infused cocktails were used as hangover cures: a.k.a. eye-openers, bracers, corpse revivers, morning glories or, my personal favorite, anti-fogmatics.

I have already tried a couple of the drink recipes.  I wrote about one of them here and there will undoubtedly be more.  Wondrich presents the recipes in original form, then does his best to specify the more ambiguous measurements and offer suggestions for the ingredients that might have been common place in 1850 but are decidedly less so in 2018.  He also includes recipes for the bitters and syrups that are harder to find now.  I made a decision about the ingredients: while it would be fun to track down all of his recommendations with an unlimited budget of both time and money, I would make do with what I have on hand.  As for the measurements, there's plenty for both my wife and me to love (see here).  I appreciate the specificity he provides in most cases whereas my wife would better appreciate his more ambiguous specifications for a dash: for bitters, simply "whatever squirts out of the top of the bottle."