A Palmetto is basically a rum Manhattan and you could probably order it that way, though as Robert Simonson puts it, "that's one extra syllable between you and your cocktail."  My books, however, offer two different recipes.  The New York Bartender's Guide has light rum and dry vermouth, 2:1 ratio with 3 dashes of Angostura bitters.  Simonson's 3-Ingredient Cocktails has Cruzan Single Barrel rum and sweet vermouth, 1:1 with one dash of orange bitters (clearly his favorite).  It was the brand specificity of Simonson's that initially drove me to the other book.  But my wife, genius that she is, suggested trying both.  Bacardi would simply have to do. 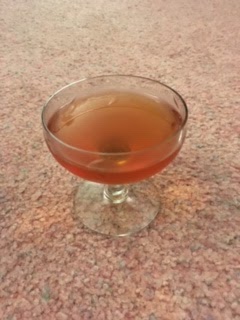 No question, Simonson's is better.  The three ingredients play together more nicely.  In the dry vermouth/Angostura option, one tastes all three components distinctly.  In the other, the rum complements the sweet vermouth more naturally and a lighter hint of bitters is still plenty.  My wife suggests that perhaps we shouldn't be so quick to turn up our noses at Simonson's fussiness.  Even the Squirt preferred the second one: 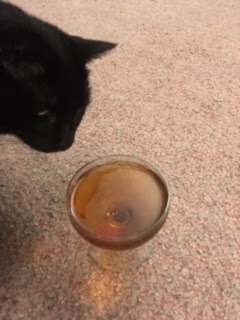