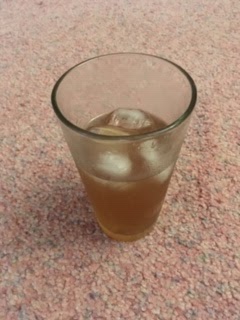 A dark 'n' stormy is comprised of dark rum, lime juice and ginger beer.  I got my recipe from 3-Ingredient Cocktails by Robert Simonson.  I forgot to take a photo until a few sips in.

Simonson is exactly the sort of writer I should pay more attention to as I embark upon the next phase of my hobby (see here).  He puts a great deal of thought into the specifics of his ingredients.  The drink has its origins in Bermuda and, partly because of this, Simonson recommends Goslings rum, a Berumda product (I used Myers's, from Jamaica).

For me, the drink worked pretty well.  It smelled amazing - not surprising given the components.  Rum brings more to the table than vodka or gin but less than whiskey.  The ginger predominates, per usual.  In mixing, it is the ultimate flavor heavyweight.  Ginger beer exploration is likely to be important for me going forward.  Both wife and daughter love the stuff and it's a primary element in a highball, one of my wife's favorite drinks (see here).  She likes her ginger beer spicy.  I used Fever-Tree this time, plenty potent.