Bitters of the Month: 'Elemakule Tiki 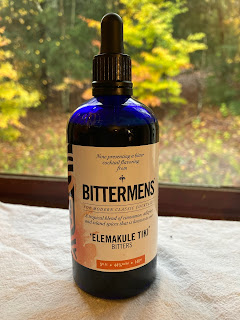 Bittermens bitters are produced by the Sazerac Company, headquartered in Metairie, Louisiana.  Their 'Elemakule Tiki bitters, while clearly invoking Polynesia with its name, aims for a broader category of "island" drinks, claiming influence from the Caribbean as well.  The two primary flavorings are cinnamon (an Asian native) and allspice (West Indies).  The scent that hit me first was cola which, of course, also features cinnamon prominently.  I got anise in the taste as well.
This one will require some experimenting (aw, shucks!).  The cola idea sends me in one direction, the anise another, the geographical allusions another still.  The Bittermens site offers recipe suggestions, though they all include ingredients I don't have - often other Sazerac products, naturally.
Stay tuned.
Posted by The Armchair Squid at 1:00 AM