Our Girl's soccer season is over. The final record: 2 wins, 3 draws, 1 loss. Officially, it was a winning season. Good job, kids! They're still in the everyone-gets-a-trophy stage. Here it is: 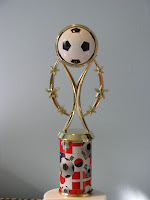 I did ask if she wants to play again and she says she wants to play every year. I figure it's worth doing for as long as she continues to enjoy it. One parent tried to recruit her for hockey this winter. I'm not too sure about that one. It would be kind of cool to have a hockey-playing daughter but she just hasn't expressed much interest in the idea. 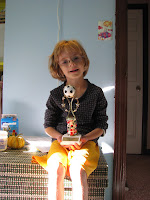 The big excitement for Our Girl this weekend was her personal makeover: a new, very cute haircut and (drum roll) getting her ears pierced. While my natural inclination is to discourage her from attaching too much importance to physical appearance, particularly her own, I do recognize that it's a big deal for a girl to start making her own decisions on such matters. Both of this weekend's big changes were her idea and the results are quite lovely. 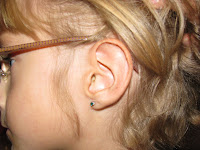 Right after she got the ears done, she was admiring herself in the mirror as "True Colors" came on the sound system. Proud Papa just about lost it right there in the middle of Claire's. Fortunately for me, we were on our way out of the store.

Posted by The Armchair Squid at 3:04 PM