On the Coffee Table: Russ Kick

Title: The Graphic Canon, Vol. 1: From The Epic of Gilgamesh to Shakespeare to Dangerous Liaisons
Editor: Russ Kick 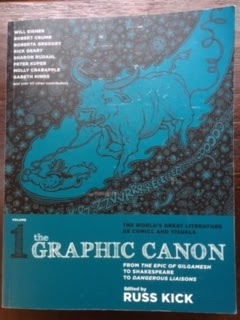 The Graphic Canon is a wonderful concept beautifully executed.  Russ Kick collected and solicited graphic novel renditions of dozens of world literature classics, ranging from antiquity to the late 20th century.  Volume 1 is the first of three in the original compilation.  Two other editions have been released since the first three: one devoted to children's literature, one to mysteries.  The work of industry legends like Will Eisner and Robert Crumb stands alongside that of younger creators.  Shakespeare, Dante and Cervantes are all in Volume 1, as are several relics of oral traditions from around the world.  Religious works - Jewish, Christian, Taoist, Confucianist - enjoy treatment.  Biographical and philosophical, too.  Particularly meaningful for this blogger is the inclusion of several Asian literature classics: Mahabharata, The Tale of Genji, The Arabian Nights, etc.  Kick wrote thoughtful and informative blurbs to introduce each chapter.

The Most Beautiful Rendering award goes to Michael Green for his interpretation of the Sufi poetry of Rumi.  The Does the Most to Inspire My Curiosity in the Original Work award goes to Choderlos de Lacios for Dangerous Liaisons, with an assist to Kick for the blurb.  A lot of high school lit staples are represented but overall the material is decidedly NC-17.  There's no denying it, the classics are frequently dirty, either explicitly or implicitly.  Makes sense.  Sex has been around for a long time.