Juniper Bar and Restaurant is part of the Hotel Vermont in downtown Burlington.  We went this past weekend for a pre-concert dinner before a Vermont Symphony performance.  This was, I believe, my second time at Juniper and my first for dinner.  As a local hangout, I think of it more as a bar than a restaurant.  Not surprisingly, it's a little noisy for a family meal. 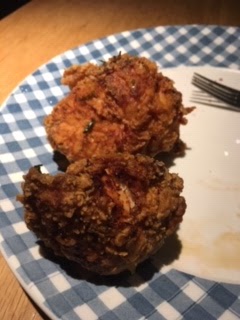 The food was good and the service attentive.  I had the buttermilk fried Maple Wind Farm chicken - scrumptious.  I ate the leg before I remembered to take a picture.  I have high standards for fried chicken and they were met: tasty batter, not too salty; dark meat juicy; white meat not too dry.  The breasts were boneless, too, which was nice.  Pyramid cake for dessert, also lovely.  The meal was pricey - not too surprising for a hotel restaurant but still worth noting.

As noted in my most recent State of the Blog post, I am on a quest for the best Manhattan in northwest Vermont.  No real standouts yet but no disappointments either.  Juniper's was perfectly enjoyable, enough so that I had two.  My most interesting discovery in my quest so far is that most people assume I want bourbon whereas I've always made the drink with rye.  "Yeah, bourbon's in," my wife says.  I'm sure she's right but who decides these things?  For the record, Robert Simonson offers the choice in 3-Ingredient Cocktails.  That might well be worth a taste test at some point when I have the time and no need to drive anywhere.

The concert was nice, too, and it featured a guest conductor: Vinay Parameswaran.  His full-time gig is assistant conductor for the Cleveland Orchestra.  The opening palette cleanser was Rossini's Overture to L'Italiana in Algeri.  The post-intermission warhorse was Beethoven's 6th - not his most famous symphony but probably the most important historically as the beginning of program music.  Lots of wonderful woodwind material which pleased our clarinetist daughter.

The middle piece was the novel treat: Vijay Iyer's Violin Concerto, "Trouble."  The composer himself was on hand (though we didn't know that until it was over) and the soloist Jennifer Koh was the very violinist for whom he had written the piece.  The relationship between violin and orchestra is more symbiotic than in most concertos and Koh's transitions from showcase to ensemble player and back were seamless and artful.  Percussion is featured prominently.