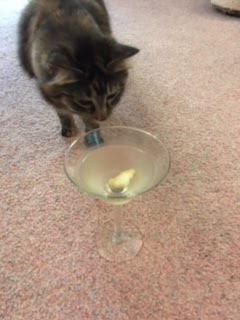 A kangaroo is another, older name for a vodka martini, which combines vodka and vermouth, dry in this case.  Robert Simonson adds orange bitters for his recipe in 3-Ingredient Cocktails.  In his blurb for the drink, he advocates using the kangaroo name so as not to annoy the martini snobs who would argue it's not the real thing unless it's made with gin.

My wife likes the marsupial name but concedes that James Bond ordering a "kangaroo, shaken, not stirred" would sound kind of dumb.  The famous line first appears in Ian Fleming's fourth Bond novel, Diamonds Are Forever, though 007 is not the one who says it.

The kangaroo is really quite pleasant.  I like Simonson's book but it's quirky.  His measurements are frequently strange.  2.25 ounces of vodka?  It's like he's being deliberately difficult.  Fortunately, I have just the right measuring cups.  There are advantages to working in my wife's kitchen.  The right tool is nearly always on hand.  He also advocates "expressing" the lemon twist before adding it to the drink.  I know that just means to twist it but I can't help adding encouraging words as I do so:

"Express yourself, little lemon peel.  Don't let the other peels tell you who you should be."