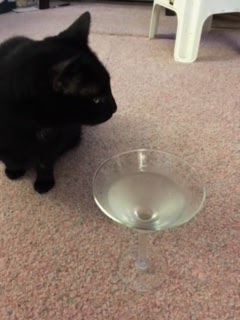 A Spanish Town Cocktail combines light rum and triple sec.  My recipe from The New York Bartender's Guide has the two in 6:1 ratio.  I joked to my wife that I wasn't sure which Spanish town it's named for and she replied "an awfully clear one."  It seems likely, though, that it is named for Spanish Town, Jamaica given the rum.

It's a flavorful drink.  With the orangey triple sec, a little bit goes a long way and in this case, there's not quite enough to overpower the rum itself.