On the Coffee Table: Alan Furst 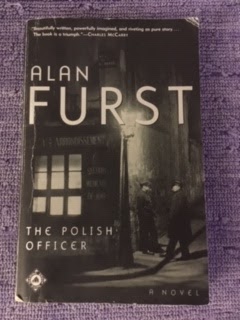 Furst's Night Soldiers series continues with this third installment.   My reflections on the first two books are here and here.  Our hero this time is Alexander de Milja, a captain in the Polish army.  We meet him in September 1939, just as Warsaw is falling to the Germans.  He is recruited for intelligence work by the ZWZ, the Polish underground resistance.  His story takes him first on a gold-smuggling train to the Romanian border then back to Warsaw before following the government-in-exile to Paris.  Most of the rest of the book has de Milja in France, based in the capital with jaunts to Brittany.  He returns to eastern Europe for the final act, a stint with partisan guerillas in the forests of Ukraine.

Each of Furst's protagonist so far has played a different role in The Game.  Kristho, in the first book, was an operative working in the shadows, a man of action valued for his brawn and cold decisiveness.  Szara, in the second, was an apparent outsider, a journalist managing the passage of information through a clandestine network.  De Milja, as the title suggests, is a professional soldier offered a choice: go to the front or work the back alleys.  The latter offered the best chance to survive so he took it.  He is smarter than Kristho, more cocksure than Szara and too handsome to fade into the crowd like le Carre's George Smiley.  His work represents more of the craft the romantic associates with the spy narrative.

I enjoyed de Milja's story the most when he was in Poland, though apparently all of the novels in the series must eventually run through Paris.  In fact, all visit the Brasserie Heininger, based on the real-life Bistro Bofinger.  The France chapters pose an interesting historical question: what is it to work for a government which, at least for the time being, doesn't exist?  In fact, we know 70+ years on that particular Polish government won't even return to power once the war's over.  Of course, de Milja couldn't know that.  He is a soldier loyal to his country.  That's all that matters.

Of the three books so far, I would say I enjoyed this one the most.  I am certainly up for continuing the series, though my wife was less impressed by the next book, The World at Night.