On the Coffee Table: Émile Zola 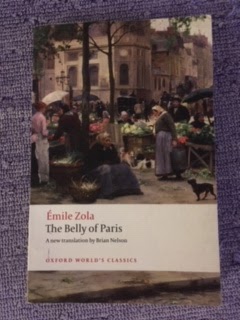 The Belly of Paris was the third in a 20-volume series for Zola, the 19th-century French novelist.  Florent, a mistakenly exiled revolutionary, returns to Paris to begin a new life.  Zola has built for him a rich and textured world in Les Halles, the city's enormous central market.  Florent's brother and sister-in-law run a charcuterie and bring him into the fold, with mixed degrees of enthusiasm.  The neighborhood runs on gossip and intrigue and Florent is quickly in over his head - though he doesn't usually realize it.

The world building is excellent and the description of each food stand is richly detailed.  The story, however, lacks in nuance.  In the end, it all seems a twisted allegory for the plight of the revolutionary spirit during the oppressive Second Empire.  The tale ends much as it began with little change for most involved, though perhaps worse off in a few cases.  It is a morality play without temptation.  Florent bumbles along with little idea of the machinations of scheming women around him.  When his reckoning comes, it's not shocking.  It's inevitable.  No Huck-like moral crisis along the way.  He is principled and careless.  Oh well.

The tour of Paris is fun, though I doubt I'll visit Zola's work again.