On the Coffee Table: Julia Child 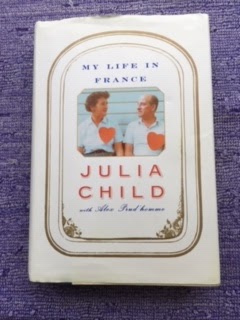 Julia Child is a hero at our house and frankly, she should be at yours, too.

My wife has been the primary cook in her family since she was 14 and food is her lifelong art and passion.  Using the word "foodie" to describe her always feels trite.  Her love runs much deeper than a hobbyist's enthusiasm.  The only reason I know anything substantive about food and drink myself is that I have lived with her for the past 20 years.  When we went to the Julia Child exhibit at the Smithsonian some years ago, there were honest tears.  No one in our culture did more to bring Old Country reverence for food into the American home than Julia Child.  It's not close.  One of a kind.

Julia Child's memoir My Life in France was half of the basis for the 2009 film Julie and Julia so anyone who has seen it is already familiar with the basics.  Julia and her husband Paul Child moved to France in 1948.  Paul served as exhibits officer at the US Embassy in Paris.  In need of her own interests to pursue, Julia went to cooking school.  Studying led to teaching which led to an ambitious and unprecedented cookbook project: translating French traditional cooking to the needs and capacities of the American home kitchen.  The book led to the public television show which made her a national household name.

The Childs loved France.  Their adventures took them to other, less exciting (for them) spots - DC, Boston, Bonn, Oslo - but love always brought them back to France.  After Paris, Paul had a posting in Marseilles, then later they built a house in Provence.  The story of their marriage is an inspiring one of mutual support and admiration and their time in France always seemed to bring out the best in them.

As one might expect, the atmosphere of the book is light, fresh and humorous.  It's easy to understand why people enjoyed being around Julia so much. However, Julia is not shy about sharing the lonelier side of diplomatic life - relevant to my own family history.  Interestingly, Paul Child worked for the same agency my father did, though earlier and in a different part of the world.  My dad's postings were in Asia.  The rich and fulfilling expat life Julia Child describes in Paris is not unlike what my parents share about their time in Tokyo.  But the times of loneliness are also part of both stories.  Not every post is glamorous.  I have often asked my parents why they left the foreign service and the emotional stress on the entire family of moving all the time is always part of the discussion.

While Julia Child's television appeal is largely due to an exuberant, larger-than-life personality, her overall success was about commitment.  The woman worked her ass off.  She had help from collaborators along the way - her co-authors, her husband, a good editor - but none of it would have happened without her own boundless energy.  Julia Child is often touted as a late-middle-age success story. The first book was published when she was 49.  But the lesson is clear: be ready to work hard!